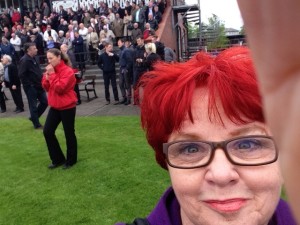 (At a horse race in Edinburgh) I told them that everyone in Texas has hair this color.

On April 22nd of this year, my brother and I flew to London to begin a month long trip through the England and Scotland. A trip like that can change a girl!

Closer looks at this journey will fill many posts in coming weeks….so much food for my writer’s soul there. For now, though, I’ll share just a quick overview

Bill and I landed in London, proceeded to wear ourselves out seeing Greenwich, the Beatles Store, the Sherlock Holms Museum, riding the London Eye, and taking the (amazing) Harry Potter tour at the Warner Brothers Studio nearby. We then traveled by coach (that’s not so much a bus as it is a …bus!) to Bath – which knocked my socks off – and to Stonehenge. This special tour takes lucky visitors inside the stone circle at sunset!!!!

The Camelot Castle Hotel sits above the Atlantic Ocean near Land’s End in Cornwall.

There we met our dear friends, David and Maggie, Together we traveled to Cornwall for three nights in the Camelot Castle Hotel and a hike up and down a mountain to the ruins of Tintagel. More detail on all of this in a future post.  After a short stop for laundry and “fish and chips with Mum”, we continued our trek north. Alnwick Castle (pronounced “Annic” as in “Attic”), is a  working castle, home of the Duke of Northumberland, and only open to tourists a few months each year. This beautiful castle and grounds served as most of the exterior shots of Hogwarts! (My brother and I are Harry Potter fans.) 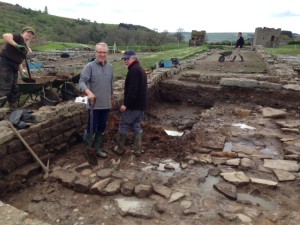 Archeologists at the site of an ancient Roman camp.

At Hadrian’s Wall and an archeological dig at Vindolanda, we learned more about Roman history in England than we could have ever dreamed, We slept in B&Bs and ate incredible food at a pub where a lively game of checkers took place each night – in front of a roaring fire.

We settled in a forest in between Glasgow and Edinburgh, based out of  a “self catering holiday cottage” for two weeks, and took day trips to explore the enchanting nearby world. Stirling Castle, (Kilts), the Battle of Bannockburn, fields of yellow flowers, icy water from snow melt raced down mountains on a dash to the lochs and the sea – all were splendid. Bill and I spent three of those days in Edinburgh – which is the most magic city on Earth – and in which there are many, many KILTS!  Expect several posts about Edinburgh in coming weeks. We attended a horse race, in incredible style, and had afternoon tea on the Royal Yacht Britannia.

The forest captivated me. It sang, it was perfumed, it was alive and ageless. I walked through it – senses on point like a hound on the hunt – every day we possible. Great food and even better company filled our bellies and our hearts.

Still farther north we traveled, climbing into the HIGHLANDS – which must be in all caps because they deserve it so. The vast nothing – which is home to so much – is both identical to and far beyond anything you ever saw in movies. David ferretted out Pictish Stones for us, so we could investigate the ancestry our father swore was ours. He was right! The proof of all those stories stood in front of us, carved on 3,000 year old rocks, in the fields and churchyards of Scotland. 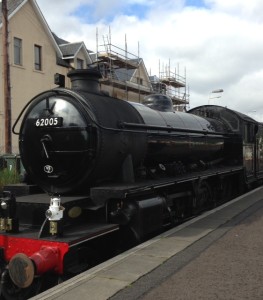 The Highland Steam Train made famous in Harry Potter fims

We rode the Harry Potter Train!

And we stayed at the Citizen M in Glasgow. And there were KILTS!

Oh, Yes…there will be many posts about this because there were many sights, sounds, tastes, and feelings on that month-long trip that I hope I never forget.